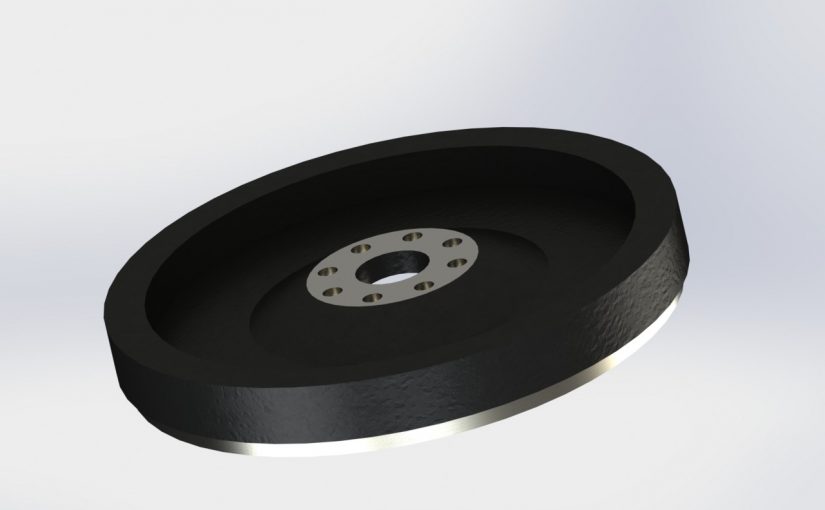 First off the engine I had bought was from an automatic and so had a flex plate rather than a flywheel. This is a comparatively thin piece of steel which gives the starter ring gear, which would be on the outside of the flywheel on a  manual, a fixing point and also mates the torque converter to the crank. In automatics the torque converter provides the rotating mass to smooth the engine pulses. So the first step was to get a flywheel that would work. My first idea was to take the factory RX8 flywheel which has quite a deep offset (i.e. it is quite dished) which would help correct for gearbox adapters which would space the gearbox off the engine. So I looked into simply machining off the back of the RX8 flywheel flat and drilling the bolt pattern from the V6 crank into it. While technically this would work there are a few problems. The image above shows exactly what I’m talking about, this is a factory RX8 flywheel modded onto a V6 crank. I believe the engine used in this case is the Mazda KLDE. While this all looks good there are a couple of issues. First is that the RX8 flywheel isn’t balanced as it stands, it forms a balanced arrangement with the rest of the engine and so needs modifying. I don’t have a picture of this but the weighted lip on the rear ranges from thin on one side to very thick the other. Aftermarket flywheels get round this by using balanced flywheel and a separate counterweight. Problem two is that the factory flywheel is cast iron, this has an irregular structure and can have flaws and other weaknesses from new but parts are generally made with a factor of safety to account for this but modification in this way will remove some of this additional strength and change areas of stress. I actually 3D modelled this change to see if it would work: Having modelled this I performed a stress analysis of this based on the force created by the flywheel spinning at 8000 RPM. This is more than redline as it stands but it seemed prudent to plan ahead! It turns out the stock flywheel is only about 20% stronger than required based on the nominal ‘standard’ properties of cast iron. The new version would be below strength at this speed, dropping to 7500 RPM gave something around 102% strength. Not a number I felt confident in at all! Just to make a point here as people argue the safety of modded flywheels a lot (mostly from “I’ve done it and it’s fine”). I’m not saying it will fail modded like this, in fact the numbers suggest it is (just) strong enough here but there is no margin for error even on the ‘ideal’ material and cast iron does vary significantly. A given flywheel might be fine like this for years, but get a weaker one or one with a flaw or even give it a hard jolt when it’s at full revs and it may just shatter. If it does, be somewhere else!

So after deciding the mod wasn’t really the best idea I realised that all I needed was a flywheel that would bolt up and work. A fairly easy task at face value since it turned out the the standard Ford clutch splines (1″ dia, 23 spline) match the gearbox the solution suddenly seemed simple and I just needed a stock Ford flywheel and clutch for that engine. It turns out there were a few variations of the Ford flywheel depending if you went for an ST200, ST220 or just a vanilla V6 Mondeo but the difference between them seems to be some are ‘lighter’ versions to make the more special cars rev a little more freely. This is achieved by leaving out sections of the outer lip on the flywheel. In my case I had no idea if this project would ever work so I bought the cheapest! This is when another problem emerged: Note the starter ring gear on each. The top is the S-Type flex plate, the bottom is the Mondeo one. It seems the Ford and Jag use a different starter motor as well. Add to this that the Mondeo flywheel puts the clutch far too far forward to mate to the gearbox and because the starter is on the engine side on the Jag but on the top of the gearbox on the Mondeo (because it’s transverse) – something we can’t do on the RX8 as the gearbox is wrong and there isn’t the room in the tunnel the whole idea falls apart! Modifying the cast one seems to be the only sensible option.

Around this time I happened to have a chat with a colleague at work who is a professional mechanical engineer and 3D designer I know through the job I had at the time and explained the problem and he directed me towards a machinist who did a lot of work for him and was well into cars. By chance a few days later this machinist came into the office and as soon as I explained the problem he just said “ah, we’ll just make you a custom one if you do a design”…. So I found myself with the challenge of designing a custom flywheel which as per the machinists recommendation would be made out of EN24 steel. As a comparison changing the models above to EN24 changes the safety factor to something around 300% from memory meaning we can lighten it significantly later if required and not risk weakening it dangerously.