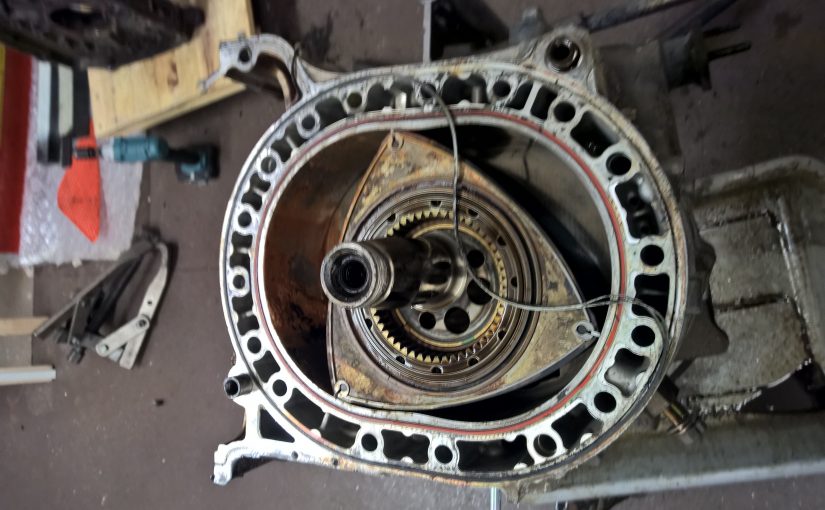 Rather long delay since the last post on this project mostly due to a server problem it took a while to resolve.

So here it is, the autopsy of a failed RX8 engine. First here’s how the engine looks freshly removed from the car.

The 13B rotary engine really is rather small and while it is true to say it is a comparatively light engine (I’ve heard figures around 130kg though I’ve not checked this) it is a solid lump with very little space inside. It’s also worth noting the four spark plugs at this point – this engine has leading and trailing plugs and actually fire the chamber twice during combustion phase which is a little unusual for an engine.

Here’s the next stage, strip all the supporting components from the engine. So the alternator, aux drive belt, manifolds, ignition coils, clutch and anything else bolted onto the main block.

So when you get to this point you will (if you haven’t already) realised the flywheel must be removed to break down the engine any further as the engine is built as a series of layers with long through bolts. These through bolts are all located under the flywheel hence why that needs removing.

The bad news here is that the flywheel is held on by a single very large nut, this nut is 54mm across flats. I have no idea what torque it is tightened to, but it’s very tight, very fine pitch and is installed with thread locker adhesive.

The first problem is locking the engine solid. I actually  used a section of steel between two of the the clutch bolts and then another bolt through one of the bell housing bolt holes. Obviously the steel must be installed across two bolts so it doesn’t cross the nut you’re trying to remove. Alternatively proper locking tools can be bought but the ones I could find were quite pricey. As for the actual nut I ended up buying a 54mm impact socket which on its own was about £30.

For the actual removal I tried a long 1/2″ breaker with a big cheater bar and ended up shearing the end off the bar! The bolt didn’t budge! I ended up convincing a mechanical fitter where I worked who was well into cars to stay a little late one night, borrowed the company van to get the engine up to the workshop and borrowed his largest 1/2″ drive air impact gun to remove it. After a bit of an argument the nut eventually moved!

Next I took off the sump, while I could have done this earlier I was largely resting the engine on the sump so it made sense to leave it in place. This moment was a huge warning of what was to come!

So, apparently this was once oil! Judging from what came out it was something like 90% or more water at this stage suggesting a serious internal failure of a water seal. This is a known problem in these engines and if caught early is repairable. In this case unfortunately the engine had still been used for some time after the warning signs started appearing with the previous owner running the car until it wouldn’t idle at all or restart when warm. Expectations for the engine were not high at this point!

It’s worth pointing out at this stage you need to find a way to prop up the engine vertically to disassemble from the flywheel end. Again a guy at work helped me out here by building me a custom engine stand from offcuts in a quiet moment but other solutions could be used. the positions I used were the rear pair of air con mounts.

On opening it I was met with this sight. Again this confirms very large amounts of water getting inside the engine. Several parts of the engine are cast iron and so will rust for a pass-time when exposed to water. Add to that the total lack of lubrication offered by the water and engines will basically overheat and the bearing surfaces will eat themselves alive.

Notice the scoring on the internal bearing surface on this rotor.

Here is the lobe on the eccentric shaft that the rotor locates on. This photo clearly shows the the lobe has experienced excessively high temperatures to such an extent the shaft has discoloured.

And the final shot shows the amount of scoring on the shaft. Clearly everything is not well.

So this is what actually caused the damage. These o-rings seal both the water from the combustion chamber (red) and from the outside world (black). As can clearly be seen in the photo the outer seal has degraded to the point of failure. The really unfortunate aspect here is is this seal failed at any point over most of its length the engine would leak coolant but this wouldn’t actively damage the engine. What happened here is the point of failure was above the sump so as the water leaked out it filled the sump with more water than oil progressively ruining the engine. The inner seal in this engine had also failed and this means that once the coolant is hot and under pressure it leaks into the combustion side. This is a common cause of the warm idle and restart problems.

So this was the final nail in the coffin for this 13B engine, both rotor housings were ruined with significant chatter marks, scoring and chipping of the hard chrome surface and these cannot be restored because the only people that have a specialist surface grinder to finish the hard chrome surface in the correct profile is Mazda. So at this point virtually everything needs replacing, effectively this is buying a new engine and costs a huge amount of money. for a £300 car it just isn’t worth it.

So now project moved onto what reasonably priced alternative engines could be fitted for less than the cost of replacing the proper engine…. 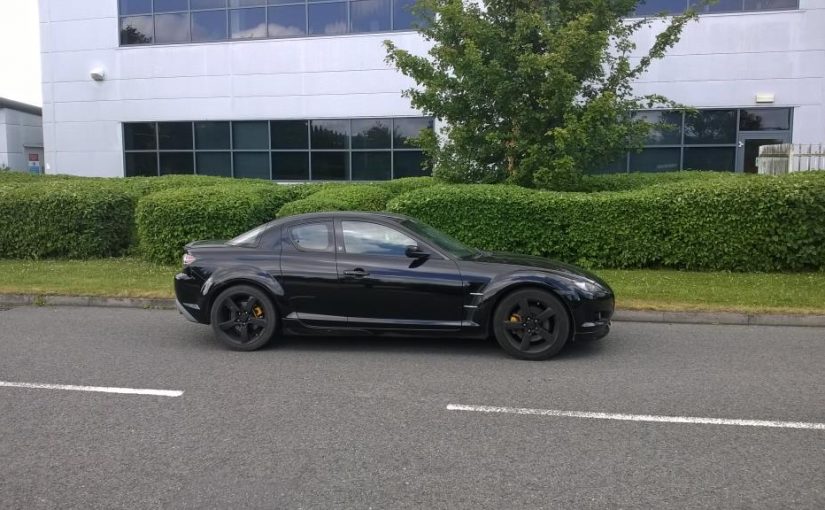 So the RX8 project involves making what is effectively a worthless vehicle useful again. For anyone not familiar with the Mazda RX8 they are a fairly high spec 4 seater car which is most widely known because it uses a Wankle rotary engine. This type of engine does not use pistons and so is incredibly smooth in operation and in the higher power (231) version of the car revs to 10,000 RPM as standard.

Sadly for all its good points the engine has a number of down sides. In terms of behavior the engine shares a number of similarities to a two stroke piston engine, one aspect is that it is designed to burn oil in normal operation to such an extent it actually has mechanical components to inject oil into the combustion chamber. This means the oil needs to be topped up frequently and it is recommended to check it every time the fuel is filled, though this isn’t as easy it probably should be and very few people do so. As a result many engines fail rapidly due to lack of lubrication once the oil gets low.

The other common failure is with the o-rings which seal the sections of the engine to each other if these fail water gets into the combustion chamber when the cooling system is under pressure (i.e. once the engine is hot). This is one common cause of the warm start/idle problems and where water gets into the oil you get lack of lubrication failure eventually as well.

The engines are expensive to get repaired assuming the fault is detected early enough and no major damage has occurred. If major damage has occurred then sections or even the whole engine may need replacement. Either way the repair is likely to cost more than the car is actually worth and this seems to happen at something around 60-80,000 miles. The combination of all of this is that these cars are abundantly available for very little money with engines in  varying degrees of failure but with relatively few miles on the clock. This leads us nicely to exhibit A:

This is a 55 plate RX8 I bought from ebay for grand total of £300 taken on the day I bought it in July 2015. While technically still road legal at this stage the car wouldn’t idle when warm so was not drive-able for any real distance without serious difficulty. In order to collect it I had to impose on a friend who has a van and car trailer for moving his racing car.

My plan for the car was to remove the engine and dismantle it to see how far gone the internals were and if possible repair the engine and reinstall it. Failing that the backup plan was to try to swap in an engine from something else simply because buying a working replacement rotary engine would cost approximately £3500!

So having got the car home the next day we started taking things out: This may look a little unconventional but in the UK the RX8 was Thatcham security rated. Part of this involved preventing the ECU from being removed because otherwise any wannabe car thief could just swap the ECU for one from a scrap yard for which they have the matching immobiliser chip, then either hotwire it or force the ignition lock like older pre-immobiliser cars. RX8’s from other countries do not have the steel retaining plates as they do not have this rating. Since the retaining bars (gold in the picture) were several mm thick and held in place with any number of rivets the only option (well the only one we could come up with at short notice) was to drill the rivets outs. I recommend centre punching (creating a divot in the centre) the rivets before drilling because they are domed and the drill will skid off. Now technically you could probably remove all the plugs on the engine and leave the ECU in place but we wanted to allow as much room as possible to take the engine out.

Unfortunately in the RX8 the engine is mounted very low and well back with a lot of ancillaries on top of it making removal a little more time consuming:

Incredibly the back end of the engine is nearly level with the visible firewall and the front is indicated by the alternator! Yes is really is a very small engine and this particular one is the lower power RX8 – so the output of this engine is *only* 192 bhp! And this was basically where we got to by the end of our first day removing parts. In truth this is only about three hours in as we’d had something of a heavy night and bright sunlight wasn’t helping the situation!