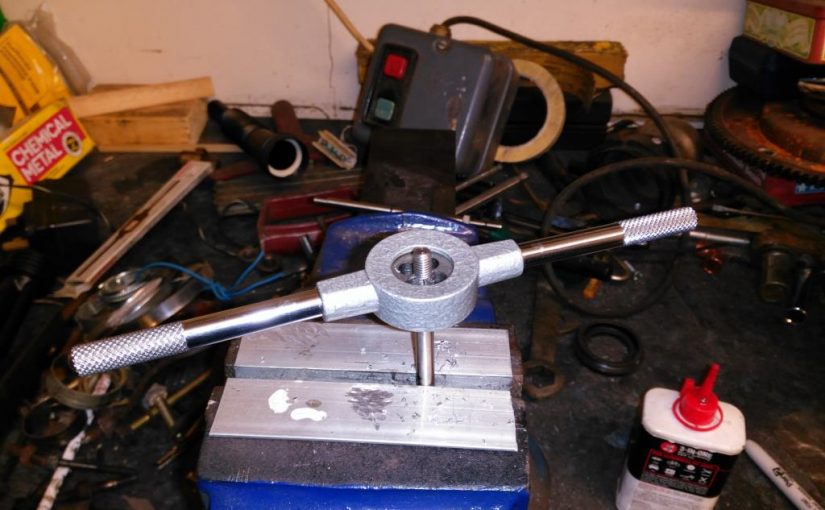 So now the project is going in the turbo direction I need to be a bit wary with how I do it. The GT1549 turbo’s I chose had positives and negatives. They looked to be exactly the right size for the engine I had, they were fairly common in one form or another and importantly the price was spot on! I still don’t understand quite how but I managed to find someone on eBay with a matching pair of these turbos fully cleaned and rebuilt for £65 each delivered! So that’s the positives, now the negatives, firstly rather than the normal bracket bolted to rear of the compressor housing to hold the wastegate actuator. On these turbos it is actually cast into the housing and so it would make rotating the housing to fit the application considerably more difficult. The second problem is they have a factory fitted actuator which isn’t adjustable more than a small amount and I really didn’t want to start tweaking a completely untested engine with no idea what was going to happen with no way of keeping the boost below the 18 psi wastegate pressure!

So getting over these problems. Having looked at the rotation problem I came to the conclusion I should be able to make them both fit with no rotation changes needed. The backup plan here was to grind off the cast in mount and custom make a bracket using a bit of steel plate if it turned out I needed to later on. This takes us to the wastegate problem. I looked at a number of ways of providing a reduction in the actuator pressure including adding springs to the rod side of the actuator and even bolting the internal wastegate solid and fitting external wastegates to the manifolds I came to the conclusion the only real way of giving a wide but reliable range of adjustment while keeping the package as small as possible would be to replace the stock actuator with an aftermarket adjustable one.

Now this is where the plan goes a bit wrong about – after looking about for ages to find a sensible option at a half sensible price the best I could come up with was this : Kinugawa Actuator I’m under no illusions here, this is a a cheapo unit! But I strongly object to spending the cost of the car on each wastegate. The problem is even though I got these for £68 each which really is very cheap they actually cost more then the pair of turbos! Considering all this it’s still a pretty good option because it is a ‘universal’ version. It comes with a range of springs for different pressures so I can start at just a few psi and swap the springs out as needed and also comes supplied with four different actuator rods.

So here we are – actuators! So at first glance they look ideal, but don’t let that fool you! There’s a couple engineering problems to overcome. The first problem is this; the hole in the supplied rod end isn’t large enough for the flap actuator on the turbo. The solution is simply to drill this out to fit. I didn’t note the sizes, but it was a standard drill size.

Next up was that this ‘universal’ actuator was never really intended for a turbo this small and as such the shortest actuator rod is too long to allow the wastegate flapper to close so I had to modify that as well. The rods are nominally 6mm diameter but the end the rod end has a fine pitch thread meaning modifying that would need me to buy a fine pitch die to extend the thread. Luckily the end that goes into the actuator is a standard M6x1mm metric thread so that was the easier option.

I measured how much I needed to shorten the rod to allow the flapper to just close at one end of the rod ends adjustment. The opening pressure of the actuator is set by preload so the more it is tightened greater the boost pressure. I then simply cut the thread down to the required point and then trimmed off the excess. The good news is if I made the rod too short I three more tries for each one! And here is the difference – it’s actually about 25mm less than it started out! Reassemble the whole thing and magically it now fits where it needs to! The other thing you will need to do potentially at this point is change the spring. Once the actuator rod is in the actuator this is actually not too bad but be a bit fiddly. First of position the actuator so the rod is sticking downward between the jaws of a vice. Tighened the vice to hold the rod in place then undo all the housing screws. Lift off the top housing and carefully remove the diaphragm underneath. Next you need to carefully release the rod to take the load off the spring. then you just unscrew the rod and take the aluminium piston and the spring underneath out the housing. Reassembly is just the reverse but the key is to put tension on the rod again and clamp it in place again before refitting the diaphragm and cap otherwise it’s very difficult to get the diaphragm correctly positioned without any wrinkles that could cause damage or leakage.

So now we have two turbos with adjustable wastegate actuators with a potential working range covering something like 3-30psi!

So I finally finished the pipe vice seen in a previous post after getting distracted by other projects. I actually needed to use it for its intended purpose which is something I never fully expected when I started restoring it. I needed to tap a thread into a section of bar as part of another long term project (involving a Mazda RX8 – soon to be added to this blog).

Somewhat appropriately the first time I used it again after putting it back together would have actually been my granddads birthday. Asking around the family by best estimations this vise was purchased for installing pipework when my granddad built his house some 55 years ago. With any luck it will last another few decades!

Anyway, here it is :