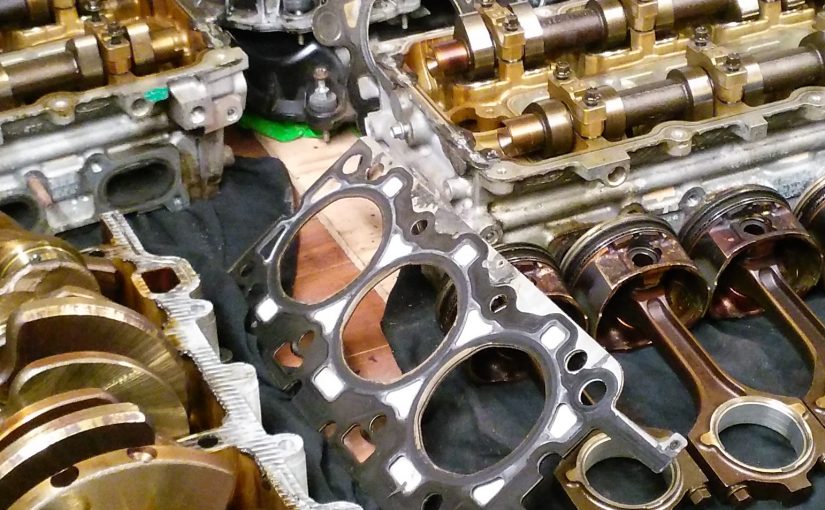 So having removed the timing chain and tensioners (see part 1) next we need to start looking at removing some more major parts of the engine.

Having already removed the cam covers already you should be looking at something like this: Thanks to the Jag Motor Project for the image – hopefully they don’t mind me borrowing it! It seems I have misplaced my own photo of this!

You need to remove the cam bearing housings because the design of this engine has the head bolts directly under the cam making it impossible to remove the head with the cams still in place. This is worth remembering and is at least part of the reason stretch bolts are used for the head – it is impossible the re-torque them after an interval of use without removing all the timing gear. As you can see in the photo these are three smaller housings and one larger one at the front each held on with two small bolts. Basically you just need to carefully remove these bearing housings in order. I suggest marking the direction and its position on each one before removal. The position could be achieved by putting each into a small tub which is numbered. However you do this you need to know which is which and which way round they go. Remove them carefully and make sure you don’t drop any bits! Once you have removed the housings you’ll see this: Now we have clear access to the head bolts which as you can see in the photo there are eight of. These are fairly easily removed except for one thing – the bolts are set well down into the head and there is very little room in the recess to put in a socket. You will need a 15mm socket for these bolts and a small breaker bar (or an impact gun) as they will be quite tight.

These bolts are not reusable – I mean you can but it’s a terrible idea particularly in such a critical location because odds are high it will not be up to the job. This is because “stretch” bolts rely on the material of the bolt reaching the yield point of the material at which it begins to exhibit a fairly constant elastic stretch. In effect once they start to deform they behave a bit like a very stiff spring and so if tightened correctly will hold a very accurate load without loosening and so do not need to be re-tightened after a run in period. That said hang onto them for now so you know what to order to replace them! You can see how tight the casting is around the socket! Once all the bolts are gone you can lift the head away. It might take a little persuasion with a mallet. Make sure you have a suitable clear space to put it on once you remove it.

Now you should have this level of grime: Obviously you can just pull off the head gasket now to improve the situation quite a bit and you can have a good look at the state of the engine: Here you can see the cylinder bore actually looks in very good condition and even still has the factory honing marks on the bores which is a good sign it’s been working well and shouldn’t have suffered wear issues.

Now do all of that again for the other head and you should have something that looks a bit like this: Congratulations now you have an engine with no heads but since my plan was to upgrade the rods I still needed to remove more so flip the engine over and we can get to it. In the picture you can see the oil pump is just held on by four small black bolts. I put the crank bolt back in place just so I didn’t lose it but you would have removed this a long time ago. Once the four small bolts are out the oil pump can just be slid off the crank and put aside. Next we need to remove the con rod bolts and this is where having the crank bolt comes in because you can put it back in finger tight and once it snugs up a bit you can turn over the engine to get access to all the rod bolts. Mark up each rod with a cylinder number and arrow for the front of the engine. I put sharpie marks across the split line of the rod to make it easier to match them up later. I had to use something to knock the piston out of the bore use something non metallic otherwise you will likely damage a surface you don’t want to damage. I used a length of wooden dowel. Do these carefully unbolting and removing one at a time. When knocking the piston out don’t forget to catch it before it falls on the floor! So all we have left is the crank. If all you wanted to do was straight swap the rods this is as far as you need to get. Well I wanted to do a few other while I was at it (more on this in another post) so I carried on to remove the crank. This is actually pretty simple at this point, you just take out the 16  main bolts holding the lower block to the upper block along the bearings. The other thing you can see in the picture are the engine mounts, the rubbers here aren’t stock s-type, they’re actually from a V8 Land Rover (Discovery among many others). The reason for this is they’re very strong, extremely cheap (£7 a pair delivered from eBay) and have a stud each side which will fit straight onto the factory cast aluminium mounting arms and also make mounting onto the car really easy when we get to that stage! It’s worth noting in the above picture not all the bolts are the same. This is because some have small studs on the top to allow the windage plate to be mounted (blue). Note which goes where so this can be put back later! Next you also need to remove the 6 outer bolts (red) before the block will separate. Once all the bolts are out again you might need a gentle tap with a mallet and/or a scraper to get the block apart. Don’t drop the crank bearings!

If you’ve done all of this you should have something a bit like this in front of you: And a heap of bits you just removed: More to come on this project in my next post!