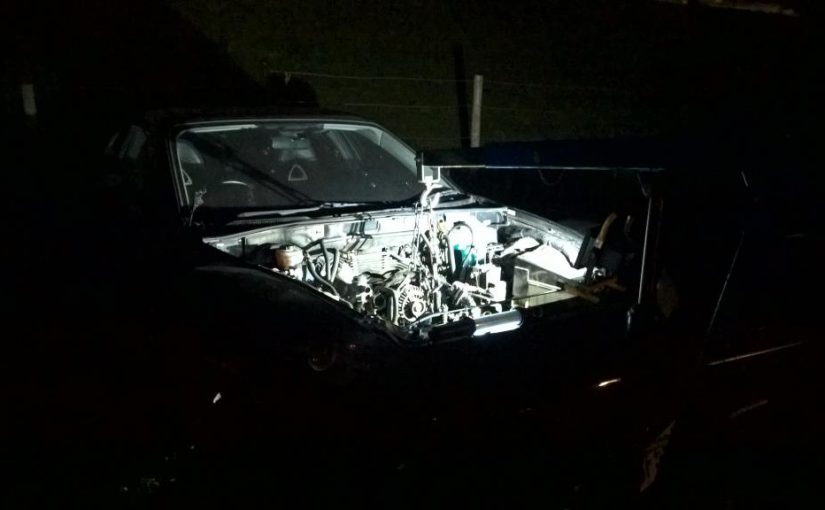 I didn’t fully document the process as there are any number of people who have already done excellent write ups of this but hopefully I can offer a couple of pointers to anyone trying to do this. Officially the engine should be removed by dropping out the front sub-frame and not being able to do this easily on a driveway has led me to removing the engine upwards. This adds a few minor problems along the way but nothing insurmountable

One thing I found is that you really need to remove the crank pulley to clear the front crossmember. While you probably could yank it past regardless it makes the process notably easier.

With somewhat awkward visibility it can be hard to tell whats going on but it looks like this. You do not need to remove the main bolt – the pulley is just held on by the four small bolts around it (already removed in the photo).

The next major problem is removing the engine mounts. I found it virtually impossible to get at in any conventional way. You can get a ratchet on but they’re quite tight and there’s little room, and a breaker bar doesn’t have room to move. My solution to this was to undo the bolts from the top of the engine bay with a selection of extensions. These need to be 1/2″ drive as my 3/8″ drive ones were starting to flex a bit plus you will probably need a breaker bar. Due to the angle restriction a UJ is also required. While the whole assembly looks a bit bodged it works fine.

Also the oil line connectors, these are really awkward and are usually corroded solid. Hose them liberally with WD40 and let it stew overnight if they are a problem. If you plan to use them again don’t lose the small retaining wire ring, these can be hard to replace (though can probably be replaced by a snap ring from an engineering supplier).

After another brief pause for another project we started watching some car based youtube videos (Roadkill and Mighty car mods for anyone interested) and after feeling inspired to do car-ish things and pull the engine out.

My best advice on this one is – don’t try to remove an engine when it’s dark and drizzling!